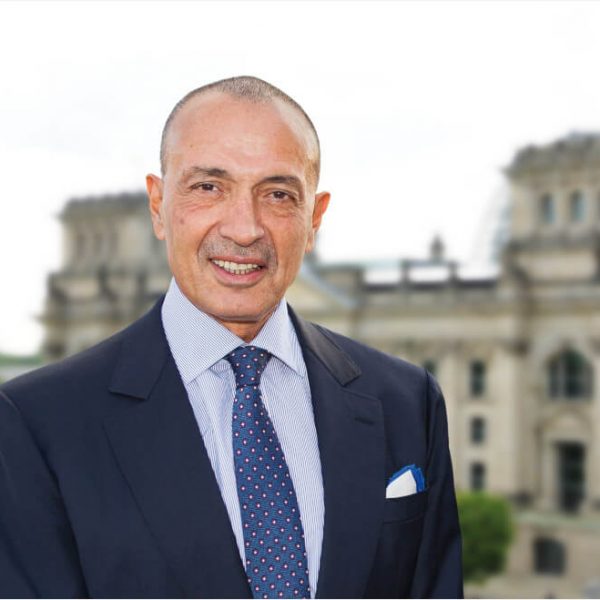 Engineer, global buiness leader, industrialist and philanthropist, Iskandar Safa is CEO and co-founder of CMN NAVAL, a leading shipbuilder in Europe and the Middle East, serving national defense and civilian customers around the world with high-tech solutions. Founded by Iskandar with his younger brother, Akram Safa, more than two decades ago, CMN NAVAL specializes in advanced, innovative ship design, engineering, production and related technologies. Headquartered in Beirut and employing more than 2,500 core employees, CMN NAVAL owns and operates state-of-the-art shipbuilding and other facilities in Germany, France and the Middle East. Under Iskandar’s vision and purpose-driven leadership, CMN NAVAL is renowned for designing, engineering and building some of the world’s best and most recognized naval vessels, commercial ships and mega yachts, delivering more than 2,000 vessels and services to more than 42 navies as well as to private customers. NATO countries and their allies in the Middle East are frequent customers.

Iskandar also has led CMN NAVAL to advance naval technology for security and commercial use, including integrated surveillance and protection systems for coastline and territorial water security. Developed under his direction, the CMN NAVAL high-speed WP18 tactical strike craft has set a new benchmark for the market.

To support a more sustainable planet, he has also focused CMN NAVAL’s R&D program on marine renewable energies. Iskandar has never sought the limelight. His focus is on delivering solutions and results for CMN NAVAL’s customers, investors and stakeholders, letting actions speak with more impact than words. But his personal story offers a glimpse into why CMN NAVAL has emerged as one of the most successful and trusted names in the challenging and competitive global market for shipbuilding.

Born in 1955 in Beirut to a Maronite Christian family amid the civil tensions in Lebanon, Iskandar was educated in a French school and graduated from the American University of Beirut in 1978 with a degree in civil engineering, following the footsteps of many on his mother’s side of the family. His father inspired his sense of public service as a political leader in Lebanon who served as director of the cabinet of the first president of Lebanon after its independence from France.

As a youth, he became the champion discus thrower of Lebanon and at one point led the entire Arab countries in this classic Olympic sport. While his life was disrupted by the civil war and he was personally wounded in the strife, Iskandar was determined not only to succeed, but to be a leader in whatever he did. This personal drive would come to define his career, his record of building successful, job-creating enterprises and his passion for making a positive difference in the world.

Soon after graduating college and his first engineering job, he went to Riyadh, Saudi Arabia, to work at his family’s civil engineering company. Iskandar’s first assignment was also the company’s major project at that time, building a military academy named for the Saudi King, which included an air strip. After three years in Riyadh, Iskandar decided it was time to leverage his engineering experience and expertise with his entrepreneurial spirit by earning an MBA from INSEAD, the European Institute of Business Administration, in France, paving his own way.

With his MBA, Iskandar launched what would eventually become CMN NAVAL with his brother Akram, who graduated from Ohio State University and the Massachusetts Institute of Technology.

Iskandar and Akram began by investing in a major European hotel company, turning it around and making it profitable. Iskandar then branched into international trade, representing Western companies in the Middle East. One client was Northrop—the USA defense contractor, which was engaged at that time in South Korea.

From the end of 1991, he took his first steps in the shipbuilding industry, purchasing an ailing but nevertheless famous shipyard in Cherbourg, France, CMN (Constructions Mecaniques de Normandie). In just two years, Iskandar turned CMN around. Today, it’s a thriving enterprise with more than 500 employees and a full order book, specializing in the design and production of trawlers, coast guard vessels, patrol boats, fast-attack crafts and corvettes.

In 2007, Iskandar collaborated with Al Aïn International to form Abu Dhabi Mar and in 2011 acquired exclusive ownership of ADM after buying out its partners, making CMN NAVAL one of the leading privately-owned shipbuilding groups in the Middle East and Europe.

When asked how CMN NAVAL has grown and thrived in the highly competitive global shipbuilding sector while others have struggled, Iskandar pointed to the strategic benefits of consolidation on behalf of customers and stakeholders. “I prefer large projects,” he said. “I like big things. I like the challenge of it.” Combining industrial and intellectual assets, talents, workforce and abilities also can produce synergies and efficiencies not only in operations and speed to market, but also the agility to quickly pivot to serve the varied needs of a wide variety of customers in a constantly changing market.

But CMN NAVAL’s success comes down to his leadership approach. He believes in picking the right executives and delegating authority so they can make decisions as they see fit, and above all, valuing employees and good relations with them.